A Turkish Game of Thrones

Turkey is expansionist and seeks to extend its power and influence from North Africa through the Middle East down to East Africa.

“You can’t play Russian roulette any longer in diplomacy. You don’t know what’s coming up next…” — Nabil Fahmy

“We are now living … not in a world order, but world disorder. We will see more chaos, more disorder, and more uncertainty…” — Cengiz Çandar

Power abhors a vacuum, and the combination of “America First” and a European malaise has left space for Turkey to try to dominate the ever-volatile North Africa and Middle East, a century after the Ottoman Empire disappeared. “Turkey is flexing its muscles,” says Cengiz Çandar, foreign policy expert and former adviser to Turkish President Torgut Özal. “It wants to project itself as an emergent regional power in the east Mediterranean.”

Nabil Fahmy, former Egyptian Foreign Minister, in a New Thinking for a New World podcast with the Tällberg Foundation chairman Alan Stoga, agrees: Turkey under President Recep Tayyip Erdoğan is “expansionist, offensive, and aggressive,” and it seeks to extend its power and influence from North Africa through the Middle East and down to East Africa.

This is the Middle East, so there is inevitably a religious element to the Game of Thrones. In this case, Turkey’s Erdoğan is challenging Saudi Arabia for leadership of the Sunni Muslim world. As part of his maneuvering, Erdoğan recently transformed the legendary Hagia Sophia in Istanbul from a museum back into the mosque it had been for centuries, declaring that it is part of a process that he hopes to be “crowned by the liberation of the al-Aqsa Mosque in Jerusalem,” per Çandar. But is this really about religion or something else? “I am one of those in Turkey who claims that [this change] is not Islamism,” Çandar says. “This is Turkish nationalism. The regime in Turkey—with some Islamic or Islamist decoration—is still a Turkish nationalist regime.”

And Turkish nationalism with an aggressive, imaginative leader has consequences. One is Turkey’s military backing of Libya’s United Nations–recognized government—which does not control major parts of the country and whose opposition is supported by Egypt, the United Arab Emirates, France, and several other counties. Turkey’s position partly reflects its desire for an ally with a long Mediterranean coast.

When Turkey’s army in Libya began driving towards the Egyptian border, President Abdel Fattah el-Sisi of Egypt “drew a red line,” says Fahmy, declaring his country would not “tolerate threats on its border.” That cooled off the situation for a time, but Fahmy still believes that “violence in Libya, directly between Turkey and Egypt or between their surrogates, is possible … [even though] that does not serve Turkey’s interest nor Egypt’s interest.”

Çandar agrees that skirmishes are possible, but points out that the Turkish leadership seems dismissive of Egypt’s military capacity. Moreover, they are wary of Russia’s interests in Libya and elsewhere in the region; “for the moment,” Çandar says, “it is more or less a frozen conflict.”

That’s the good news. The bad news goes back to that long Mediterranean coast that led Turkey to Libya in the first place. Çandar notes that after the discovery of substantial offshore natural gas resources, Greece and Egypt on the one hand and Turkey and Libya on the other signed overlapping, conflicting maritime agreements.

“The imminent danger is between Turkey and Greece, even though both are members of NATO,” says Çandar. It might be ironic at a time of falling gas prices, but recently Turkey has pushed research and military ships into the contested zones and actively challenged the legality of Greece’s claims. The Germans tried secret diplomacy, and the French sent a warship and jet fighter to support Greece, but Turkey insisted that it will defend its claims. The situation seems likely to worsen.

Part of the problem is Greece and Turkey’s long, fraught, and unresolved history (think still-divided Cyprus), and part is that confrontation with Greece has always been good domestic politics for Turkish leaders. Çandar points out that Egypt “is too far away and doesn’t constitute any kind of national security threat … but, when it comes to Greece, it is much easier to mobilize nationalist fervor in Turkey.”

War between two NATO allies? It’s possible, Fahmy and Çandar agree, but likely to be limited. “There are too many factors that would not support large-scale sustained war,” says Fahmy. Çandar goes a bit further, asserting that, at least until the United States chooses a new President, “the policy of Mr. Erdoğan … may take the region to a war. Not at the scale of the Arab-Israeli wars of 1967 or 1973, but war at a certain scale at least to create a new balance of power in the region.”

War is war, and war in the Mediterranean during the 21st century should be unimaginable.

The problem is the power vacuum. Çandar points to “the divisions within the European Union and the absence of the American power in the international games, with the ‘America First’ position of President Trump.” Fahmy echoes the argument. “The main superpower isn’t there,” he says. “The Europeans are divided on the ground. So it’s very difficult to calculate what to do, who to ask to do what.”

The irony is that, for years, Fahmy—the career diplomat—saw Egypt and Turkey as the “most appropriate countries to help move the Middle East towards the center, towards moderation, towards tolerance for many, many reasons. But that’s not going to happen in the present-day situation. … Egypt and Turkey are actually both becoming more nationalistic.”

If Erdogan and Sisi can’t lead, and the Americans and Europeans are absent, who does that leave? Probably no one, but Fahmy holds out hope for an Arab solution. “A more robust national security capacity in the Arab world … [including] weapons and political relations that are more robust, more integrated, and more rational, would create checks and balances regionally to start the process moving forward,” Fahmy argues.

Çandar is skeptical, pointing out that Egypt is perceived to have vacated its leadership position in the Arab world decades ago, and he implicitly dismisses the possibility of leadership from the Gulf Arabs. “Mesopotamia has become the center of gravity of the Middle East,” he says, leaving only two local powers that matter: “Iran, following the revolution of 1979, and Turkey, the newcomer with the advent of Erdoğan at the turn of the century.” While that seems a realistic description, it is not an optimistic platform for peace and prosperity.

Nabil Fahmy and Cengiz Çandar recently spoke with Alan Stoga as part of the Tällberg Foundation’s “New Thinking for a New World” podcast series. Hear their whole conversation here or find us on a podcast platform of your choice (Itunes, Spotify, Acast, Stitcher, Libsyn). 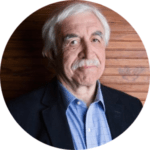 Cengiz Çandar is a  leading Turkish expert on the Middle East, public intellectual, scholar, journalist, and former foreign policy adviser to President Turgut Özal.  Currently serving as the Distinguished Visiting Scholar at the Stockholm University Institute of Turkish Studies and Senior Associate Fellow at the Swedish Institute for International Affairs, his most recent book is  “Turkey’s Mission Impossible: War and Peace with the Kurds” published in June, 2020. 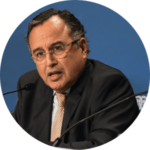 Nabil Fahmy is a former Foreign Minister of Egypt (2013-14) and career diplomat who served as Ambassador to the United States (1999-2008) and to.Japan (1997-99). He is the Founding Dean of the School of Global Affairs and Public Policy at the American University of Cairo (2009) to which he returned after his time as Minister.