A Conversation with Neil Quilliam

Imagine hundreds of thousands of young men and women, partying through four days and nights in the desert. Where?  Maybe Burning Man in the Western United States? Some place near Marrakesh (in a flashback to the 60’s)?

No, try Saudi Arabia last December. The Saudi Arabia that murdered Kamal Khashoggi and where, until recently, “you had the religious police on the streets tapping people’s legs or whacking them with sticks for dressing inappropriately or behaving immodestly.” Fast forward to last December when a “very large bunch of young men and women mixing, dancing, partaking of all sorts of things in modern Saudi Arabia. I mean this is big, this is profound, and this a huge transformation,” insists Neil Quilliam, a seasoned Middle East expert at Chatham House in London.

Quilliam argues that the Middle East, long an epicenter of conflict and unrest, is changing, perhaps fundamentally. Economics is starting to trump politics, or at least, ideology. Young leaders are coming to power. The geopolitical deck is being reshuffled, to the point that Arabs and Israelis are working together on economic as well as strategic projects, the Sunni/Shia confrontation is quieting down, and the hegemony of the United States is fading.

Almost by definition, as Saudi Arabia goes, the region goes. And Quilliam says, Saudi Crown Prince Mohammed bin Salmaan (MBS) “realized that, with the country’s burgeoning demographic and with the hydrocarbon historical arc where it is…if this ruling family is going to hold onto power, if it’s going to govern the kingdom for the next 50, 60 years, some deep change has to take place.” He “released the energies of youth…opened the floodgates, if you like, for a lot of pent-up excitement and enthusiasm from a Saudi youth who don’t want the Saudi of their fathers or their grandfathers.”

Quilliam describes MBS who is demonized in the West as having “energy, dynamism, brashness, impatience” in his efforts to reform Saudi Arabia. His vision for the country is “very much focused on the future…He wants to get the economy up and running. He wants to bring about that transition and that transformation.” He wants “social reform enabling economic transformation…Looking post hydrocarbons, how does this country, which is effectively the size of Western Europe, that’s 90% if not more, dependent on hydrocarbons, manage that significant transition?”

From the perspective of the Crown Prince, Quilliam emphasizes, the key is social not political reform.If anything, politics in the Kingdom are becoming more concentrated under MBS.  Quilliam says that, “You’ve gone from a system where a very large number of princes were involved in decision making, where consensus was essentially the driver of decision making…to a concentration, a consolidation of power in the hands effectively of one person. And that’s the Crown Prince. When he becomes King, it will sit entirely in his hands.”

Quilliam emphasizes that 10 or 20 years ago there was considerable space in Saudi Arabia for spirited discussions about reform, broadly defined, “but that space now has really, really narrowed.” The result is an inconsistency, at least to Western eyes, between an economic and social space that is opening and a political process that “has absolutely stopped.”

Will it work? Quilliam has little doubt that the MBS reform project has considerable momentum and acceptance, at least among the Kingdom’s young people—which matters in a country where 2/3rds of the citizens are under 30. In the long run, though, it will be about performance; if the economic reforms can deliver even half of what is promised “that might be enough.” The caveat is important: “When you’re reforming subsidies, cutting a lot of the benefits that have been enjoyed by parents and grandparents, you [risk] eating away a little bit at the bedrock of support if benefits don’t percolate through other ways.”

The urgency of the economic and social transformation has geopolitical consequences.  For starters, “MBS doesn’t want to go to war with Iran; that would pose a massive threat to the country… he’s likely to do all that he can to prevent conflict.”

Yet the Iranians and their allies are clearly still at odds with the Saudis, as evidenced by debilitating Houthi attacks in 2019 on Saudi oil infrastructure. Indeed, Quilliam suggests those attacks might prove to be inflection points: “The Saudis and the Emiratis were shocked by what they saw as U.S. inaction in response to those strikes…that literally sent a shockwave across the Gulf.” That shock was amplified by the fact that the President who failed to respond—Donald Trump—had shown himself to be incredibly sympathetic to Saudi interests.

The consequence, Quilliam argues, is that senior Saudis are saying, “We’re looking out to the future, and we understand that U.S. interests are elsewhere, so therefore we need to hedge. We need to diversify. Diversification, whether that’s economic or whether that’s through security, is just a fact of life and that’s something we have to do.”

Hedging takes various forms. On the one hand, it means more economic trade and investment with China, which is now Saudi Arabia’s largest trading partner.  However, the Chinese don’t yet want to expend the “diplomatic, political or certainly military capital” that could replace the United States.  On the other hand, it means participating in an “anti political Islam ‘alliance’ of states.”  Amazingly, that group includes Israel as well as most of the Gulf Arabs, Egypt and Jordan.  Those countries share at least two concerns: fear of potential Iranian aggression and doubts about the legendary American protective “security umbrella,” so they are actively exploring unprecedented ways to cooperate.

These re-alignments are still in flux.  The good news is that Quilliam does not think that they will be tested anytime soon.  It’s “almost impossible to imagine” Iran invading Saudi Arabia or the Emirates, or a Gulf Arab state attacking or invading Iran.  The whole region is “evaluating, reevaluating where their real interests are.”

Meanwhile, maybe the long elusive “Middle East peace” has already happened while the rest of the world has been distracted by Great Power politics.

Neil Quilliam recently spoke with Alan Stoga as part of the Tällberg Foundation’s “New Thinking for a New World” podcast series. Listen to the episodes here or find us on a podcast platform of your choice (Apple podcast, Spotify, Acast, Stitcher, Google podcast, Youtube, etc). 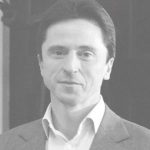 Dr Neil Quilliam is an energy policy, geopolitics and foreign affairs specialist, with extensive knowledge and experience of the Middle East and North Africa (MENA) region. He is Managing Director at Azure Strategy Consulting, and an associate fellow with Chatham House’s Middle East and North Africa Programme. He headed the programme’s Future Dynamics in the Gulf project. Prior to that, Neil was project director of the Syria and Its Neighbours policy initiative and acting head of the MENA Programme, having first joined Chatham House as a senior research fellow in January 2014. He has also served as senior MENA energy adviser at the Foreign and Commonwealth Office (FCO), senior MENA analyst at Control Risks, London, and senior programme officer at the United Nations University, Amman. Neil has lived in Saudi Arabia, Jordan and UAE, and has travelled extensively around the MENA region, working on a variety of development, education and research projects. He has published a number of books and articles on international relations and political economy of Syria, Jordan, Iraq and the GCC states.