Gorillas (and people) in the Mist

A few days ago we were visiting the gorillas and you could see that they were actually quite happy to see visitors coming back. Some of them even tried to get close because they think, “Hey, you’re back!”

How can you protect the gorillas when the communities aren’t benefiting?

We’re seeing win-win situations for people, animals and the environment.

During 2020 many of us learned a new word: zoonotic.  As the pandemic changed our lives, we discovered that many diseases are zoonotic, that is, the pathogens that cause them move from animals to humans and vice versa: everything from coronaviruses like Covid and SARS to rabies, West Nile and Ebola. However, this was old news to scientists and veterinarians like Uganda’s Dr. Kalema-Zikusoka, who for years has been working to save the critically endangered mountain gorillas of East Africa. As founder and Chief Executive Officer of Conservation Through Public Health (CTPH) she promotes conservation by improving the quality of life of people and wildlife to enable them to coexist in and around protected areas in Africa.

Dr. Gladys, as she is known, says the concept is simple: “let’s see how we can improve the health of the people as well as the health of the wildlife…We’re actually seeing a lot of gain…when gorillas come out [of the forest], they don’t find open defecation, many people have got toilets now, and they have hand-washing stations or hand-washing facilities…even more during the COVID-19 pandemic because people are worried about making each other sick. And so, gorillas are falling sick less often.”

“We’re finding that by doing that we’re reducing the threats to gorillas, but also people feel happy that we’re addressing health care which is a basic human need,” continues Kalema-Zikusoka.“Very often conservation is seen as people who care more about the animals and the forest than people, but by bringing in health intervention, we’re showing the local communities that we also care about them and their welfare.”

And that’s the key idea underlying CTPH: “don’t only address human disease by itself, but address animal disease, whether that’s livestock or wildlife, and human disease together. Because they all live in an ecosystem.” This One Health approach means “getting the medical doctors, the veterinarians, and the environmentalists and conservationists to work together to solve common problems.”

Dr. Gladys’s story started in the mid 90s when she was working as a veterinarian for the Uganda Wildlife Authority in Bwindi Impenetrable National Park (BINP). Her team identified a scabies outbreak among the mountain gorillas of BINP, then traced its origin to the poor health and sanitary conditions in the local communities living around the Park. She treated the gorillas with Ivermectin, but realized that the disease would simply recur if the underlying health and sanitation issues in those neighboring communities were not improved.

Since then, Kalema-Zikusoka has worked at the intersection of animal and human health. Her efforts have contributed to the increase in the mountain gorilla population from 630 to 850, and to a significant improvement in the health and welfare of Ugandans living near BINP.

An essential part of the CTPH mission has been to develop a viable and sustainable eco-tourist industry around the mountain gorillas. “Gorilla tourism has lifted many of those communities out of poverty,” she says. Rangers, tour guides, government officials, porters, handicraft makers, restaurant and hotel workers—the list goes on of people who now have jobs because of tourists coming to Bwindi to see healthy mountain gorillas in their natural habitat.

Unfortunately, the pandemic largely put a stop to tourism this year, with catastrophic consequences for people as well as gorillas. Rising poverty has decimated health programs with potential adverse consequences for humans as well as gorillas. And, as communities have lost jobs and incomes, people have returned to the forest and poaching, not aimed at gorillas, but at other animals. However, earlier this year a poacher hunting wild pigs fatally wounded a mountain gorilla; in a first, the poacher was sentenced to 11 years imprisonment.

The optimist in Kalema-Zikusoka sees silver linings to these dark clouds. On the one hand, humans are realizing how much they need healthy mountain gorillas; on the other hand, the pandemic has allowed her team to update protocols designed to assure adequate distance between humans and gorillas when tourism restarts.  Moreover, “another silver lining is, for some reason, we’ve had a baby boom… We’ve had eight gorillas born in the space of two months.” Dr Gladys speculates that “less human disruption… means that they’ve been able to…carry their babies to full term.”  Nevertheless, she is also sure that the gorillas have missed their human friends.

What happens post COVID? Kalema-Zikusoka is working to scale CTPH’s approach combining human health, gorilla health, and livelihood improvement in Uganda and throughout Africa. She believes a responsible gorilla tourism industry can be built in other countries that are home to great apes and is convinced the approach will work with other species as well. “We’re looking at disease issues between wildlife, livestock and people, and in savanna habitats and mountain habitats and forest habitats. And we also helped to shape an East African community population health environment strategy which is combining family planning, health and environment around these protected areas.”

Kalema-Zikusoka deeply understands the mutual dependence between humans and animal communities, and has seen people and communities come to recognize how intertwined their lives are with those of their gorilla neighbors. 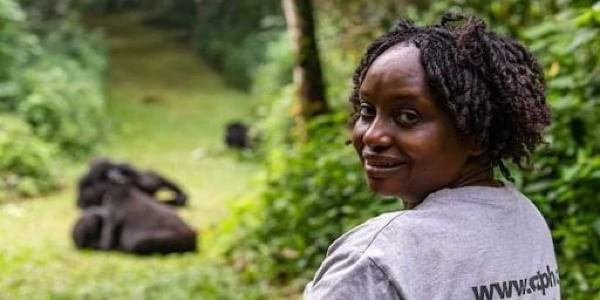 By way of example, Dr. Gladys shares a story:

“When an aging silverback male named Ruhondeza—an original leader of the gorilla group with whom we worked—settled in community land, the wildlife authority called me and said, “Could you maybe translocate him back because he’s not keeping with the group.” But when we get there we saw that he really wanted to settle in community land, which is just bordering the park. And he was only occasionally taking a banana, banana plant, or coffee. So we just said to the locals, “Can you tolerate that?” And they said, “We can.” I am sure that was because, when our elders get old, we look after them—and Ruhondeza was quite old.   And, so, Ruhondeza stayed there for a few months. When he died, the locals came to pay their last respects at his grave. It showed that they understood that this was the gorilla that allowed tourism to begin.”
The point is simple but incredibly powerful: “when you get to that level of coexistence, then there’s a big future for wildlife.”  She must have thought, but did not say: and for humans, too.

Dr. Gladys Kalema-Zikusoka recently spoke with Alan Stoga as part of the Tällberg Foundation’s “New Thinking for a New World” podcast series. Hear their whole conversation here or find us on a podcast platform of your choice  (iTunes, Spotify, Acast, Stitcher, Libsyn, etc). 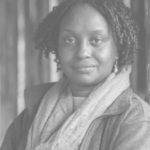 Dr. Gladys Kalema-Zikusoka, Uganda, a veterinarian and scientist, works at the intersection of human and animal health.  Her work addresses the well being of human communities and wildlife where they interact, in order to contain the spread of zoonotic diseases, with global implications for a world trying to cope with the Covid pandemic. Dr. Gladys was a finalist for the 2020 Tällberg Eliasson Global Leadership Prize.