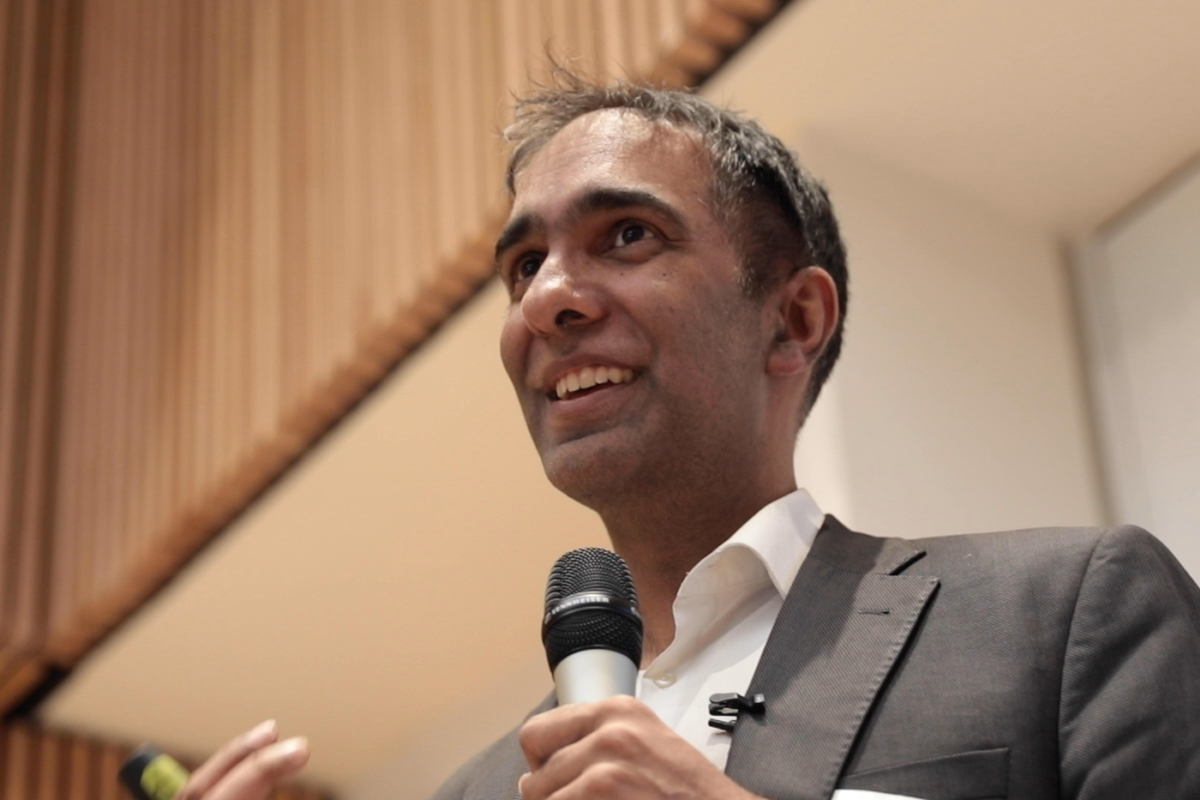 As founder of the Open Source Pharma Foundation, which is creating a crowd-sourced alternative to the pharmaceutical industry, Jaykumar Menon feels he may have met his moment. Just a couple of years ago, “We were considered crazy people,” he says. “And now I think we were shown to be prescient. Everybody in the world is thinking about pharma R&D.… And everybody in the world is, or many people in the world are, thinking about openness and affordability.” Some are even making the connection between public health and human rights, which is how Menon got started.

A finalist for the 2020 Tällberg Eliasson Global Leadership Prize, Menon has already seen the success of OSP’s open-data, computer-driven approach: “We are now in phase 2b clinical trials for the therapy for tuberculosis. We’ve shown that it can be done. We got there … for less than $50,000. And we did it in less than one year.” There was some soul-searching before the decision to work on Covid-19 as well. But, he notes, “They’re both respiratory pandemics” (TB having killed more people than Covid this year) “so we had experience in working in re-purposing for respiratory pandemics.”More important, he believes, are the values OPS can contribute: “This is the hour for the open source idea, for human collaboration around the world,” he says. “The current system is isolated, it’s repetitive, it’s duplicative, it’s competitive.” Government backing is key, Menon knows; he is building a multinational alliance to provide an infrastructure for the repurposing of drugs, which has been happening “willy-nilly.” OPS is also working with the government of India on an open-source Covid vaccine, ready for phase-three clinical trials, which puts them “near the very front” of the global vaccine race.

Short video “Medicine for All” about the OSP Foundation’s work.

This is not the first impossible goal that Menon has set himself. He started as a human-rights lawyer by freeing a man who was serving a life sentence for murder, in 2004. (The case was seen as unwinnable, but after five dogged years, Menon found the real killer.) He represented the student leaders of Tiananmen Square against the ex-premier of China. He took the brainchild of two visionary scientists—the Salt Project, a plan to tackle the biggest source of global malnutrition by putting iron in salt—and made it a reality for millions. “I think I just got used to thinking that things were possible,” he says. “And, not only is it possible, that we can and should do them.”

For all his credentials—J.D. and master of international affairs from Columbia, a year of medical school at Brown, professorship at McGill’s Institute for International Development, two academic positions at Harvard—Menon often operates as an non-expert, working “from first principles,” as he puts it. “You ally yourself with the experts and what’s missing is—it’s nobody’s job to solve world hunger. It’s nobody’s job to create affordable medicines. And sometimes just what’s needed is a vision and some skillful sheep-herding and pushing.” Add to that a big dose of tenacity, which he knows is another one of his gifts. “The difference between somebody with a cool idea and somebody who could have an impact on the world, is the willingness to run through walls.”