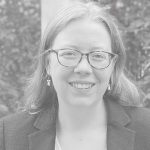 Emma Ashford is a resident senior fellow with the New American Engagement Initiative in the Scowcroft Center for Strategy and Security at the Atlantic Council, a nonresident fellow at the Modern War Institute at West Point, and an adjunct associate professor at Georgetown University. She’s the author of the forthcoming book, Oil, the State, and War.

Wars have cycles: sooner or later, the fighting ends and the negotiations begin. As hard as it is to imagine amidst the unfolding tragedy of Russia’s aggression against Ukraine, the diplomats and politicians will eventually gather to define new borders, behaviors, and rules. The Russian attack shattered the European security structure that had evolved after the Cold War ended; something must replace it.

Of course how the fighting ends will shape whatever negotiations ensue. But it is never too early to think about the future contours of the map of Europe.

This podcast with Emma Ashford, Washington-based Atlantic Council geopolitical expert, was recorded before Russia attacked Ukraine. Nonetheless, Emma’s thoughts and speculation about a new security structure for Europe are even more important now than when we discussed them before President Putin chose to go to war.

Please let us know what you think about this episode of ‘New Thinking for a New World.”