Is China Complicit in Ukraine?

Why did Xi apparently green light Putin’s war? What does China potentially gain from war in Europe? How does this war fit into China’s long-term strategy? 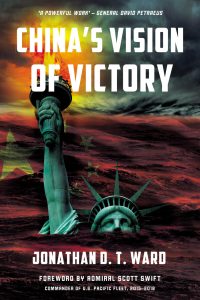 Jonathan Ward has been studying Russia, China, and India for nearly twenty years since his undergraduate days in Russian and Chinese language at Columbia University. Dr. Ward is the author of China’s Vision of Victory, a guide to the global grand strategy of the Chinese Communist Party which has been widely read in US government and national security circles, as well as by audiences in business and finance. He earned his PhD at the University of Oxford where he specialized in China-India relations, after initially being admitted to Oxford for a doctorate in Russia-China relations during the Cold War. He has traveled widely in Russia, China, India, Latin America and the Middle East, and speaks Russian, Chinese, Spanish, and Arabic, among other languages. As a subject matter expert, Dr. Ward has been an advisor to the US Department of Defense on Chinese long-term strategy and has briefed numerous US government audiences including at US Strategic Command, US Indo-Pacific Command, the US Department of Commerce, the US Defense Intelligence Agency, and the Strategy Division of the US Naval Staff. Through his consulting company, Atlas Organization, Dr. Ward helps Fortune 500 companies and financial institutions understand US-China global competition, improve their risk assessments on China, and build new global strategies that can withstand historic geopolitical change. He is a frequent commentator on national and international television and radio, with appearances on Bloomberg, CNBC, Fox Business, Fox, MSNBC and CNN International, among other stations. His next book, on the future of US strategy towards China is forthcoming in 2023.

Arguably, any understanding of the Russian invasion of Ukraine must take into account the Beijing Winter Olympics or, rather, the meeting there of Presidents Xi and Putin. They held extensive talks about the state of the world and about their relationship. When they finished, they declared that friendship between China and Russia “has no limits” and that “there are no forbidden areas of cooperation.” Can there be any doubt that included Putin’s war plans as well as Xi’s willingness to provide support when the much-advertised Western sanctions eventually kicked in?

Why did Xi apparently green light Putin’s war? What does China potentially gain from war in Europe? How does this war fit into China’s long-term strategy?

Almost a year ago, Jonathan Ward shared with us his thinking about “China’s Vision of Victory,” which was also the title of a book he had recently published. Now he reflects on China’s role in Russia’s war and the implications for the United States and the rest of the West.

What do YOU think?