Listen as Ambassador Dina Kawar parses the possibilities, good and bad, in the Middle East 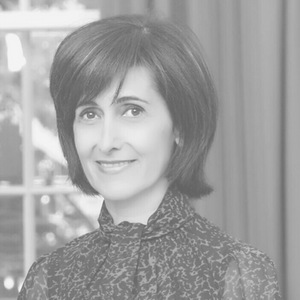 Ambassador Dina Kawar was appointed as Ambassador Extraordinary and Plenipotentiary of the Hashemite Kingdom of Jordan to the United States of America in June 2016.

Ambassador Kawar also served as the Permanent Representative of Jordan to the United Nations from August 2014 to June 2016. She has led the Jordanian delegation during Jordan’s non-permanent membership of the United Nations Security Council from 2014 to 2015 and became the first Arab woman to ever preside over the Council. In February 2016, she was appointed by the President of the General Assembly as a co-facilitator for the high-level meeting of the plenary of the General Assembly on the large movement of refugees and migrants to take place in September 2016.

Prior to her position in New York, Her Excellency Dina Kawar served as the Ambassador of Jordan to France from 2001 to 2013, with concurrent accreditation to the United Nations Educational, Scientific and Cultural Organization (UNESCO) and to the Holy See, since 2002. She also served as non-resident ambassador to Portugal from 2005 to
2013.

Ambassador Kawar was awarded the Medal of Independence of the first degree by His Majesty King Abdullah II of Jordan and holds a number of decorations including the “Commandeur De La Legion d’ Honneur” from France, the “Medalha de D. Afonso Henriques” from Portugal and the “Insignes de Dame de Grand-Croix de l’Ordre de Saint Grégoire le Grand” from the Holy See.

Like almost everything else on the global scene, the Middle East of today is significantly different than the region that has been such a locus of conflict over the past 50 years. Key actors seem to be refocusing their political and diplomatic efforts from war to peace and are beginning to build a new network of relationships that transcend old rivalries. Some of this reflects a growing awareness that local leaders, not those in Washington, Moscow, or elsewhere, are likely better equipped—and certainly better motivated—to govern in the interest of the people who actually live in the region.

In this context, Jordan, under the leadership of King Abdullah II, is playing a major role. Although—or, perhaps, because—the country lacks water and other resources and has been badly impacted by the Syrian civil war over the past decade, Jordanian diplomacy has kicked into high gear in this search for a new, positive future.

What do you think?