“Expect to have very violent reactions after the pandemic”

Pierre Lellouche worries that bad is likely to get worse. Listen as he discusses how Europe got stuck between the United States and China, the future of democracy, and the tragedy of social movements focused only on race and gender. 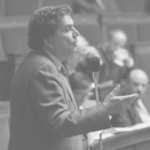 “I am struck that the bad guys—Trump, Boris Johnson, Netanyahu—have been able to handle this crisis infinitely much better than the good guys in Europe—Macron, Merkel, von der Leyen and so on—who have been highly bureaucratic, slow, incompetent.” — Pierre Lellouche

Europe has had a bad few years. The struggles between North and South mostly over economics, between East and West mostly over values. Brexit, which shifted the locus of power eastward and distracted European leaders from any possibility of a more positive agenda. The pandemic, which among all its other impacts led to interrupted borders in a Europe that prided itself on having no borders. Tensions with the Americans, the Russians, the Chinese, and overall a sense that Europe is largely irrelevant to what happens elsewhere in the world.
Pierre Lellouche, former French parliamentarian and minister, worries that bad is likely to get worse. Listen as he discusses how Europe got stuck between the United States and China, the future of democracy, and the tragedy of social movements focused only on race and gender.

What do YOU think?

Listen to the episode here or find us on a podcast platform of your choice, (Apple podcast, Spotify, Acast, Stitcher, Libsyn, etc).
Back
Subscribe