The Taliban’s surge to power in Afghanistan is one of those events that will have repercussions for years to come. Listen as Jamila Afghani talks about escaping the Taliban, and what she expects for her country. 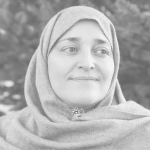 Jamila Afghani, president of Women’s International League for Peace & Freedom (WILPF) Afghanistan and civil society activist, has worked directly in the intra-Afghan peace process over the course of 2019 to 2021.

In July 2019, she addressed over 50 Afghan leaders and Taliban representatives in the Intra-Afghan peace dialogue in Doha, where she pushed for women’s rights in the country.  Later that month, representing WILPF Afghanistan, she briefed the UN Security Council and presented recommendations to include Afghan women of diverse backgrounds in the peace negotiations.  In October 2019, as the 2017 winner of the Aurora Peace Prize, Jamila joined over 157 global leaders as the Aurora Forum Goodwill Ambassador in 39 countries to further women’s empowerment in Afghanistan.

As a long-time advocate for women’s meaningful participation in the Afghan peace deal, Jamila has been outspoken about the political and human rights situation in Afghanistan through WILPF channels and more notably her work was also spotlighted in leading news channels such as Al Jazeera, Tolo News and Norwegian Afghanistan Committee seminar series.

In July 2020, Jamila addressed a UN Women event, Crisis and Opportunity, on Afghan women and the COVID-19 pandemic. In September 2020, she was also a panelist at the WILPF and Women’s Regional Network webinars, where among other aspects she spoke about building a network of over 6000 Islamic scholars in 22 provinces to educate them on women’s rights.

The Taliban’s surge to power in Afghanistan is one of those events that will have repercussions for years to come. Geopolitical, strategic, military, perhaps religious, but most importantly, humanitarian. We all watched in horror as hundreds of thousands of women, men, and children tried to flee what seems likely to be a re-imposition of the Taliban’s brutal pre-modern style of ruling.

Jamila Afghani, our guest this week, succeeded in getting out with her family. Jamila is an educator, a leader, and an activist. Her work to elevate the rights and improve the education of women and girls is based on her studies of Islamic law, which she believes is typically misinterpreted to give them second-class status. Jamila is also a past winner of the Tällberg-SNF-Eliasson Global Leadership Prize.

Listen as Jamila talks about escaping the Taliban, and what she expects for her country.

Listen to the episode here or find us on a podcast platform of your choice, (Apple podcast, Spotify, Acast, Stitcher, YouTube, etc)