China: On the Road to Perdition?

Is China’s leadership acting out of strength or weakness? Is war possible? Is war avoidable? Listen as Kevin Rudd assesses where China is today, and where it wants to be tomorrow. 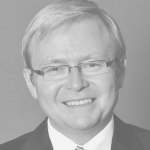 Kevin Rudd became President and CEO of Asia Society in January 2021 and has been president of the Asia Society Policy Institute since January 2015. He served as Australia’s 26th Prime Minister from 2007 to 2010, then as Foreign Minister from 2010 to 2012, before returning as Prime Minister in 2013. He is also a leading international authority on China. He began his career as a China scholar, serving as an Australian diplomat in Beijing before entering Australian politics.

Under President Xi Jinping, China has shown a growing willingness to act outside the accepted geopolitical, economic and even diplomatic global framework and practices. Indeed, Beijing’s actions suggest a rejection of the post war system in favor of one that is not just rejiggered to accommodate China’s growing superpowers, but that is dominated by it.

The latest data points? President Xi did not show up at COP 26; reports from Glasgow suggest the Chinese have been playing a spoiling role in the climate talks; tensions over Taiwan continue to rise; Chinese rhetoric aimed at the United States, Australia, and Europe is increasingly harsh. Not a day goes by without new reports of China asserting what it sees as its prerogatives as the soon-to-be largest economy in the world.

What’s going on? Is China’s leadership acting out of strength or weakness? Is Xi merely probing the West’s weaknesses or has he decided the time is ripe to push hard? Is war possible? Is war avoidable?

Australian Kevin Rudd has spent a considerable part of his life thinking about, working on, and negotiating with China — as a diplomat, twice as his country’s prime minister, and currently as president of the Asia Society. Arguably no other western leader knows China better. Listen as he assesses where China is today, and where it wants to be tomorrow.