“A republic, if you can keep it”

Congressman Gephardt, a Democrat, firmly believes America needs bipartisanship to cope with the divisive spirits that are tearing at the country. Listen as he talks about some of the things that urgently need to be done, not just in the United States, but everywhere that democracy is under pressure. 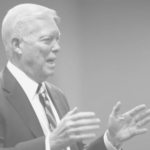 During 2020, Mr. Gephardt actively worked to prevent an array of threats to the integrity of the election and transition through an organization he helped create: Keep our Republic.

One of America’s most revered founding fathers, Benjamin Franklin, allegedly used those words to describe what kind of political system the writers of the U.S. Constitution had created. The amazing events of recent weeks—Donald Trump’s concerted efforts to undo an electoral outcome that he didn’t like, the assault on the Capitol, and the impeachment of a President who is no longer in power—caused many Americans to remember Franklin’s concerns about the stability of their form of government. Congressman Dick Gephardt, former Majority and Minority Leader in the House of Representatives, shares those worries. In this episode of New Thinking for a New World, he told host Alan Stoga, “I think we’re as divided and in danger of losing the democracy as we were in 1860,” when the United States fought its civil war.

Congressman Gephardt, a Democrat, firmly believes America needs bipartisanship to cope with the divisive spirits that are tearing at the country. Listen as he talks about some of the things that urgently need to be done, not just in the United States, but everywhere that democracy is under pressure.

Unwrapping the Riddle That Is Mexico / Jorge Castañeda

Jorge Castañeda thinks Mexico is in trouble, but almost half of all Mexicans say their country is on the right path. Mexicans, not known for being optimists, apparently are optimistic. Why? *** Winston Churchill famously described the Soviet Union as "A riddle wrapped...

Asia for the Asians — but which Asians? / C Raja Mohan

Listen as C Raja Mohan explains how India can cope with a dangerous world and a dangerous neighbor. *** We live in a complicated, conflicted world. Russia's unprovoked war in Ukraine. US and European efforts to punish Russian aggression in ways that challenge the...