Ambassador Yousef Al Otaiba, the United Arab Emirates long serving ambassador to the United States and also a key player in the process of creating this new Middle East, discusses the future of the region. 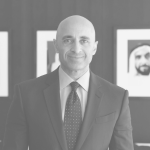 Yousef Al Otaiba is the Ambassador of the United Arab Emirates to the United States and Minister of State. His tenure at the UAE Embassy in Washington, DC has been marked by several bilateral accomplishments in the fields of security, civil nuclear energy, health, education, culture, equal human rights and more. Among his biggest successes thus far include his involvement in the US-UAE 123 Agreement and the Abraham Accords normalization pact between the UAE and Israel in 2020.

Ambassador Al Otaiba is a current Leadership Council Member of the Center for Public Leadership at Harvard’s Kennedy School of Government and helped introduce the Emirates Leadership Initiative in 2014. In addition, he serves on the Board of Directors for the Special Olympics, where he’s worked hard to develop new opportunities for athletes with intellectual disabilities, including the 2019 World Games in Abu Dhabi. He also serves on the Board of Trustees for the American University in Cairo and has been closely affiliated with Meridian International Center, Children’s National Medical Center and the UAE Embassy’s Community Soccer Program.

He previously studied at Cairo American College, Georgetown University and the Industrial College of the Armed Forces at the National Defense University.

“I think we are in the very, very early stages of what could be re-imagining what the Middle East looks like and how it operates. What I’ve watched over the last several years is a shift in mindset, a shift in attitude, younger people are tired of conflict, they’re tired of ideology. They want solutions. They want jobs. They want what every young person around the world wants.

A case can be made that the Middle East is going through a realignment as significant as any since statesmen drew lines on maps after World War I or since the state of Israel was created in 1948.

New realities are emerging: peace instead of war among key Arab countries and Israel; reduced United States political and military engagement; reversal of militant Islamic fundamentalism; most importantly, growing confidence that local leaders—not those in Washington, London, Moscow, or elsewhere—can best produce peace, prosperity and security in the region.

In this week’s New Thinking for a New World podcast episode, Ambassador Yousef Al Otaiba, the United Arab Emirates long serving ambassador to the United States and also a key player in the process of creating this new Middle East, discusses the future of the region.

Listen to the episode here or find us on a podcast platform of your choice, (Apple podcast, Spotify, Acast, Stitcher, YouTube, etc).
Back
Subscribe