You May Choose to Look Away, But Never Again Say You Do Not Know

“The demand for exploitation is not just something that is related to poverty. It is related to a certain kind of human volition, which is global and somehow we have normalized it.” — Sunitha Krishnan

Why do nations, rich and poor, in the 21st century, tolerate widespread slavery and human trafficking, including the buying and selling of young children? These abominations exist everywhere and are growing—right now. How is that possible?

Sunitha Krishnan is an angry witness and activist who demands answers as well as action. “You see a sense of impunity everywhere in the world, in countries which have more vulnerable communities, which [have] more poverty, which has more reasons for people to be in desperate situations,” she tells Tällberg Foundation chairman Alan Stoga in a conversation for the New Thinking for a New World podcast series.

“The demand for human beings—for exploiting somebody else—that is increasing and increasing absolutely astronomically,” she observes. “More and more, little children are preferred. … Human slavery for commercial sexual exploitation is perhaps becoming one of the biggest organized crimes in the world.”

Krishnan explains that, “The youngest child that I have had the misfortune of rescuing is around three and a half years old. So we’re talking about very, very little children who are sold for satisfying the desires of some man somewhere.”

She speaks with the passion of someone who herself experienced exploitation at a very young age. “When you lose your children … it’s humanity getting wiped out [by] slavery and exploitation. You’ll see it. You’ll feel it. It’ll pinch you very hard. You’re losing your national resource. You’re losing humans to slavery,” she insists.

Few if any nations are innocent. “More than 130 countries have the same problem, so the rich countries are not spared,” Krishnan points out. And yet everywhere, most people look away. “[The world] makes all the right noises, but doesn’t take the right actions,” Krishnan says. And unless greater willpower develops, she is forced to believe, “We really don’t want to change it.”

Part of the problem is on the supply side of the equation. “The supply rests on the vulnerability of human minds,” she says. Economic desperation leaves people and parents vulnerable. Families sell children—“in the last few days, the only kind of cases that I’m dealing with are families selling off their children repeatedly”—and people sell themselves, not because they want to, but because they think they have to. “You’re also dealing with a whole world of social cultural practices,” says Krishnan. “There are communities that sanction this form of slavery.” Indeed, they sometimes consider exploitation to be their community’s livelihood.

Krishnan is as skeptical of curtailing supply as she is about eradicating extreme poverty and “the social cultural exclusion of [a] huge number of below-poverty-line individuals.” In practice, that means focusing on ending demand.

“When you look at human trafficking, especially from the sex-trafficking spectrum … you’re talking about men and male desires,” Krishnan explains. She underlines the “vulnerability of the male ways” that underpins the demand sex slavery and exploitation. That demand “is further supported by poor legislation, poor implementations of law, poor implementation of the criminal justice system.”

And while the lockdowns caused by Covid-19 have dramatically reduced trafficking in the short run, that doesn’t mean that the male desires have disappeared. They just have been temporarily and artificially restricted. “Online sexual exploitation of children has increased a hundred-fold during the pandemic,” Krishna says, “That’s more invisible and more difficult to deal with.” Moreover, she predicts that when the pandemic eventually ends, “lots more women and children will be sold again because of the economic devastation that we are seeing now.”

What can be done? Krishnan insists that, “The answers are local. The problem is global. So each country has to find their own answers from their own situations because the situation that we see here is not what you see in your country.” But she admits that legislation in India is weak and weakly enforced—and in need of change.

Yet after years of working with women and children who have been exploited, abused, raped, and trafficked, Krishna does not expect political leaders to stop the exploitation of human misery. “We have lost faith in people who are supposed to be our rulers,” she says. “I don’t think they represent the moral compass for us, which was there once upon a time.” Instead, she is convinced the movement must come from ordinary citizens. “We have to become the change agents,” Krishna urges. “Expecting anybody else to do it—I’m sorry, it’s not going to work out. I think each one of us has to take the responsibility, and we become the moral bank for the communities.”

Yet creating “community vigilance” is only part of the solution. The children and women who have been freed from exploitation need safety. That’s why Prajwala—the organization in Hyderabad, India, that Krishan co-founded and guides—exists. The goal is to “create a whole world of therapeutic communities,” Krishna says, “a safe space for people to recover, recoup, and heal themselves and get back a life with dignity.”

However, coping with mankind’s depravity day after day is physically and emotionally exhausting and, of course, dangerous. And the Covid-19 pandemic has only increased the exhaustion and danger: India’s public health system is weak; social distancing is near impossible; and many of the young children with whom Krishnan works are highly vulnerable to the disease because they are already HIV/AIDS-positive as a result of their exploitation.

Krishnan aches for a time when Prajwala is not needed. “I want to have one day when I can sleep properly and say, ‘Okay, no child, no woman, no human being is being exploited anywhere in the world,’” she says.

Can she imagine that day coming soon? Her answer is only a wan smile.

Sunitha Krishnan recently spoke with Alan Stoga as part of the Tällberg Foundation’s “New Thinking for a New World” podcast series. Hear their whole conversation HERE or find us on a podcast platform of your choice (Itunes, Spotify, Acast, Stitcher, Libsyn). 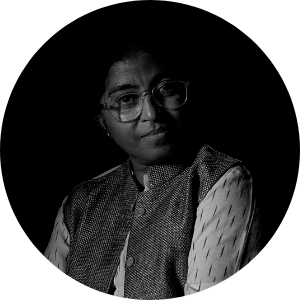 Sunitha Krishnan, Co-Founder and Chief Functionary of Prajwala, an anti-trafficking organization in Hyderabad, India. She is one of India’s most passionate human rights activists who has committed her life to end sex slavery globally. For the last two decades her contributions to the anti-human trafficking sector has gained national and international attention. Ms Krishnan is an advisor to several State Governments to develop holistic victim services and also plays an important role in the Inter-Ministerial Committee at the national level to draft comprehensive legislation on human trafficking. Ms Krishnan was one of the recipients of the 2016 Tällberg Eliasson Global Leadership Prize